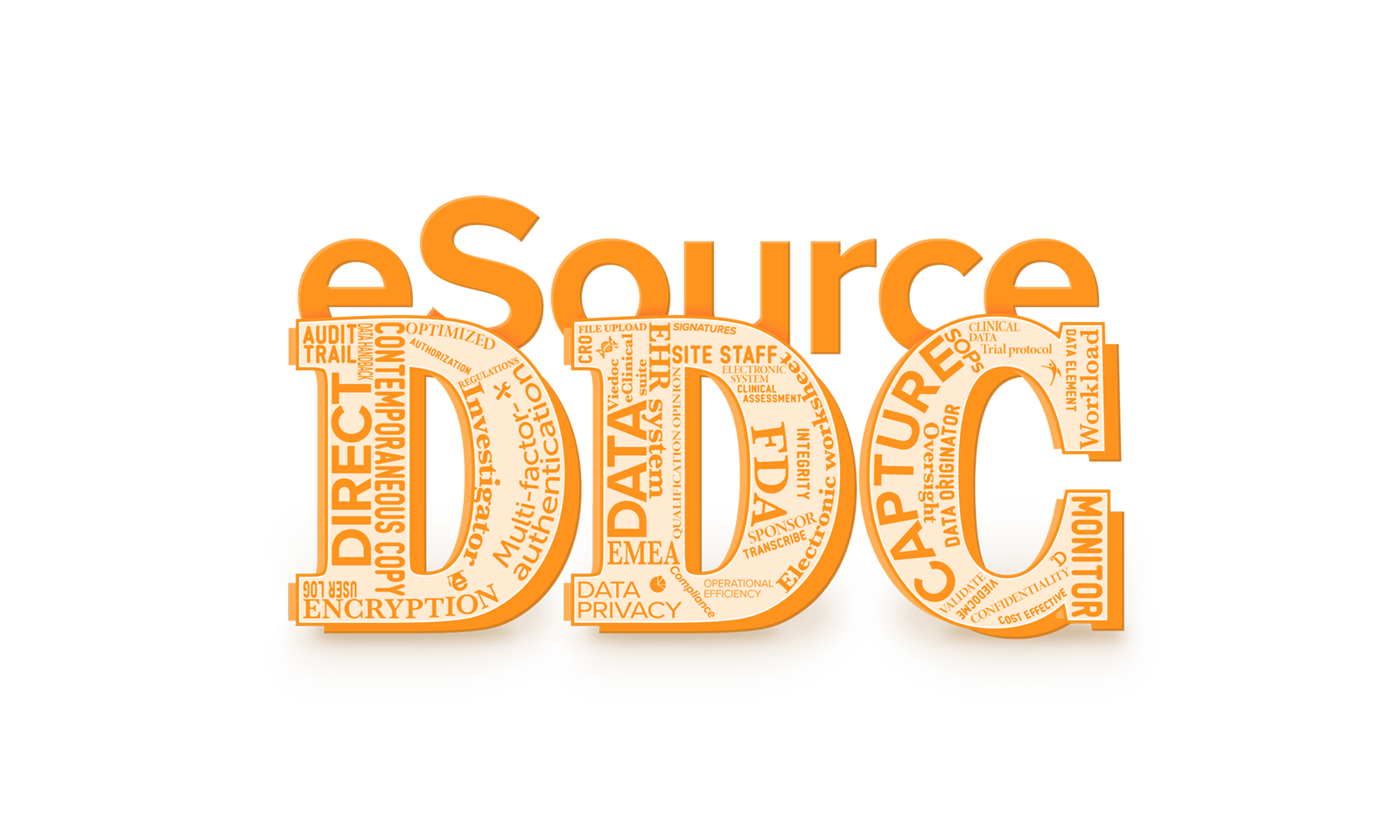 Although they have been around for many years, the terms eSource and Direct Data Capture (DDC) seem more popular than ever. In the context of this document, the term eSource Direct Data Capture (or eSource DDC) refers to direct data entry of source data by investigator site staff at the point of care into an electronic system specifically validated to capture clinical data.

Viedoc has many advantages when it comes to eSource DDC. First of all, there is no need to sync data between an app and the EDC as Viedoc doesn't need an app to manage eSource. Secondly, there are no extra costs involved as Viedoc's eSource functionality is part of the standard license fees. Finally, setting up a study for full or partial eSource data collection doesn't take any longer than setting up a study without any eSource forms. It’s even possible to mix sites that enter data as eSource with sites that do not in the same study, using the same forms. On top of this, you also get to utilize the full stack of features that comes with the Viedoc eClinical suite when using Viedoc to collect your eSource data.

The purpose of this document is to describe how Viedoc is natively optimized for eSource DDC and what you as a client need to be aware of to use it for this purpose.

The EMA states in their Qualification opinion on eSource Direct Data Capture (DDC), 25 July 2019, that, to be acceptable, an eSource DDC system and application should be customized in line with local legal requirements and ICH GCP, validated, tested for user acceptability, be secure and maintained. EDC systems have for many years been used for full or partial eSource allowing direct data entry when defined and approved in the trial protocol and the regulations for eSource systems are already to a wide degree indirectly covered by existing guidances.

An essential element of the eSource DDC concept is to improve patient safety, data integrity, and operational efficiencies for clinical research allowing new therapies to reach patients faster. Directly entering the clinical assessment (and other source) data into the EDC system during the clinical visit as opposed to transcribing the data from the EHR system helps achieve this. The eSource DDC approach also means that the EDC system may be populated with information that is not requested in the clinical trial protocol or personal information that has not been pseudonymized. Such data should not be shared with the sponsor who should only receive the specific data required by the protocol.

Viedoc has supported eSource DDC from its very first release in 2004, helping to decrease the workload for both the site staff and the study monitor by allowing entry of source data directly into the EDC. With a highly configurable role-based permission system ensuring that only certain roles can access specific data and flexible options when it comes to data handback, Viedoc clients can design electronic worksheets that help replace the need for traditional trial-specific worksheets such as those traditionally used by investigators to amend their routine documentation in the patient health records. A certified copy of this data can then be promptly uploaded into the local EHR system or kept as a copy in the patient paper chart. As each site is different, it is important to keep a flexible approach when it comes to how sites should upload their data into their systems.

With the release of Viedoc Clinic in 2014, Viedoc was optimized for use on tablet devices. The same year ViedocMe was released which added the possibility of eSource DDC by subjects from mobile devices such as mobile phones and tablets.

The following chapters further explain the characteristics of Viedoc's native functionality optimized for eSource DDC as well as other important topics to be in place to ensure everything from patient’s privacy rights to regulatory compliance.

The definitions below are taken from the FDA guidance issued in September 2013, "Guidance for Industry Electronic Surveillance CIinicaI Investigations":

The heart of Viedoc is about confidentiality, integrity, and availability of clinical data. Data isolation is by design through a role-based permission system. Roles are highly configurable to enable a project that follows the principle of least privilege. This principle guarantees the patient’s privacy rights as users with a sponsor role cannot access personally identifiable information (PII) and can only view a unique patient number which is assigned by the site to each trial participant. 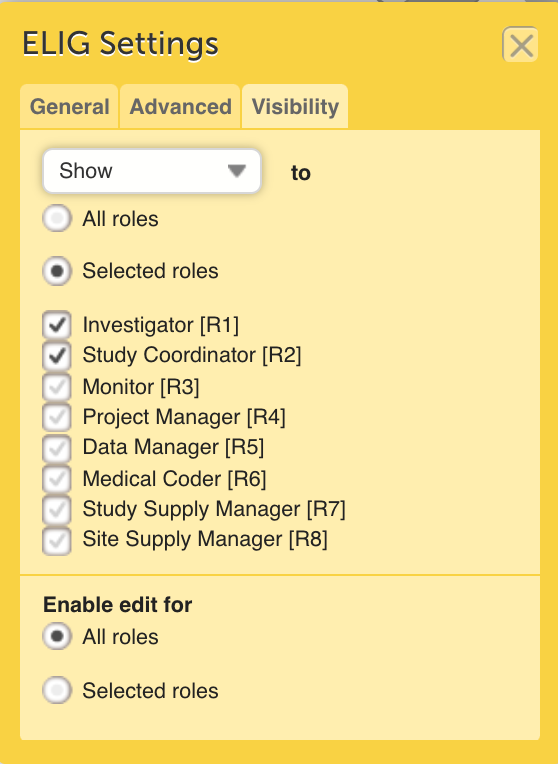 Viedoc provides a contemporaneous PDF copy of the data at the same time as the data is saved. Moreover, the data is not stored on a server under the sole control of the sponsor, but within Viedoc’s servers, where the investigator can access it at any time (the legal equivalent of storing it at the investigator site).

The role-based permission system, in combination with multi-factor authentication, and a sophisticated system for delegated provisioning / deprovisioning of user access, is the core of Viedoc's information security and supports the principle of least privilege.

Encryption is applied both in-transit and at-rest. Multi-factor authentication can be enforced on project level but can also be enabled at-will on user level. Viedoc features encourage a delegated access management approach which makes recognizing incorrect/outdated access authorization possible. 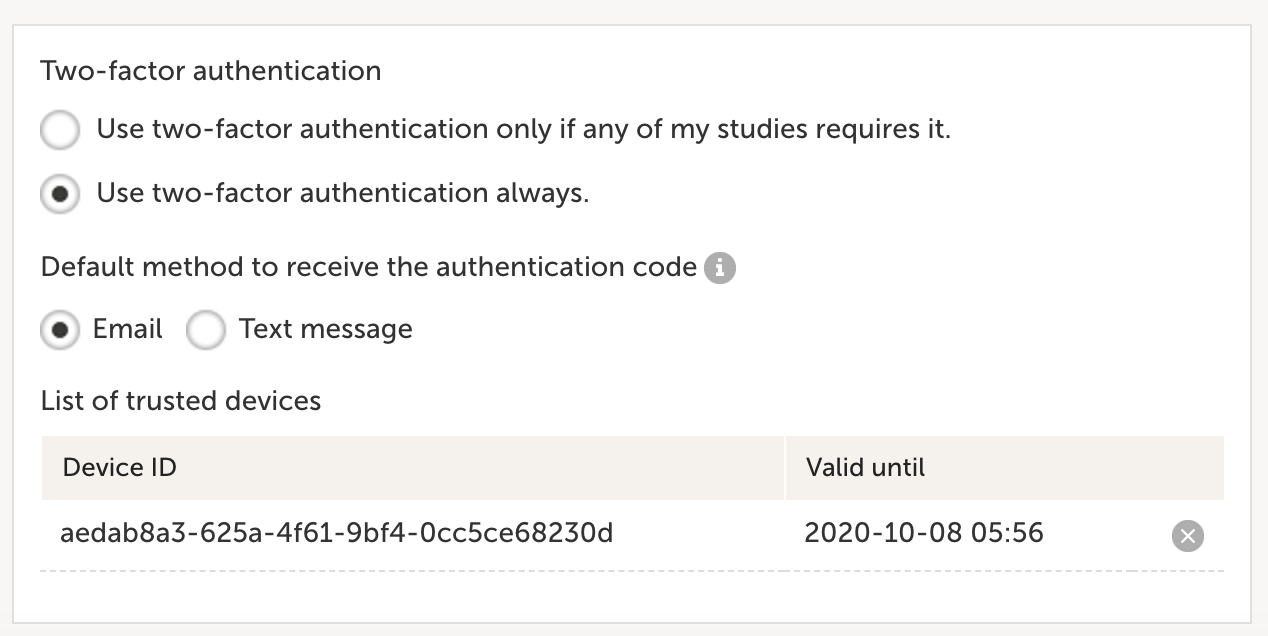 Viedoc’s eSource DDC approach is that Viedoc should (whenever possible) be used as the primary data entry point during a clinical visit. However, in scenarios where the EDC system cannot be the primary entry point, e.g. due to local regulations, the site staff should indicate this in a source data location list before transcribing the data into Viedoc.

Modifications and corrections of data 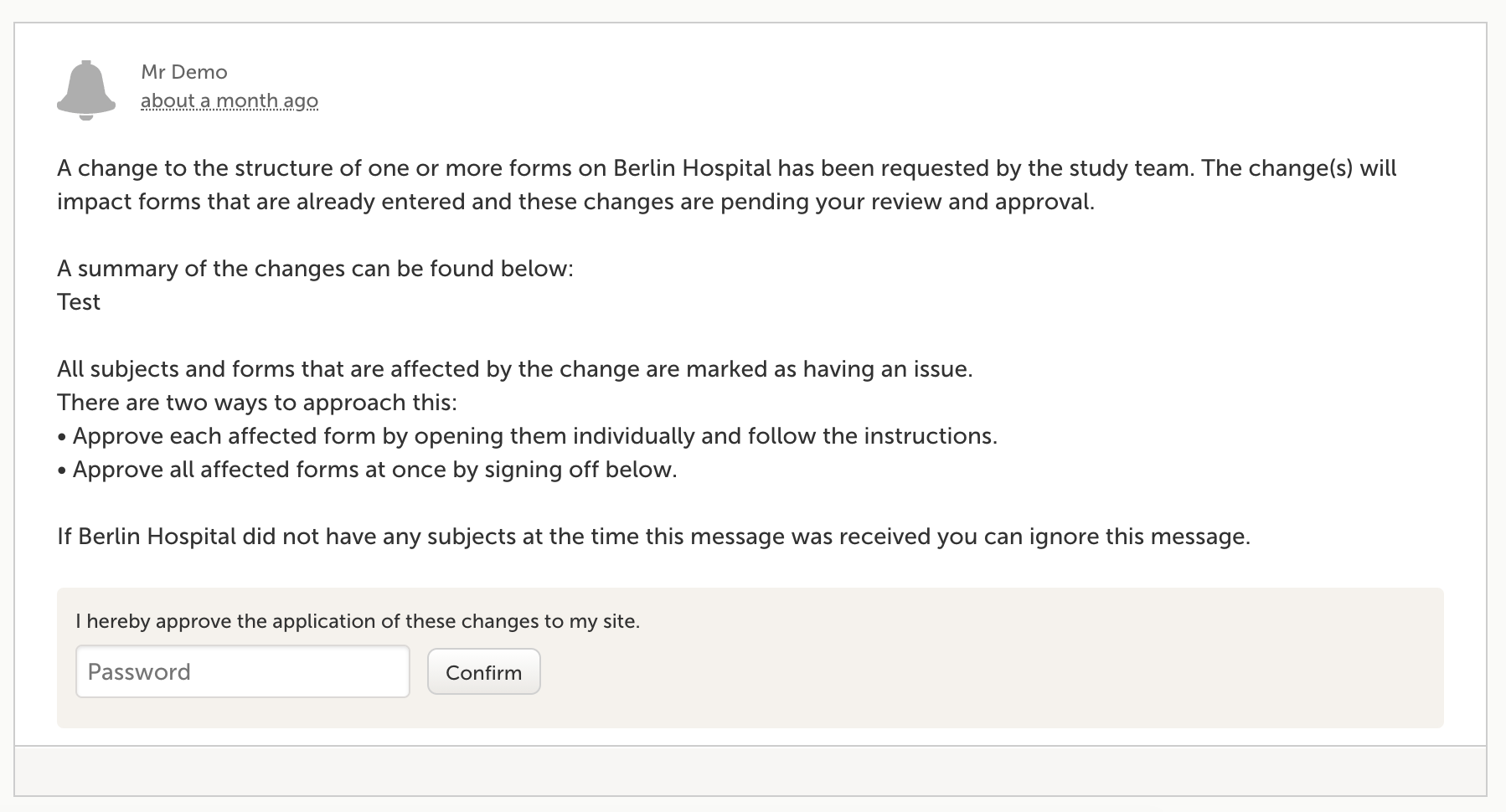 Multiple project designs can be in effect simultaneously for the same study, even for the same research subject, depending on the data collection time point, which in its unique implementation and execution is one of the more competitive features of Viedoc. This enables that the patient data collection/storage can be configured on a per-site basis to ensure that only the permitted information is collected.

The FDA recommends the following when it comes to data access:

Viedoc provides a way for users to see which other users have access to the same site through a specific user roles page. This page lists all user roles available on the site, including the details of the user's current access status, activity as well as if a user has contributed to data to ensure data authenticity. This feature is enabled by default to all study user roles and supports the sponsor in fulfilling the requirement to have a list of the individuals with authorized access to the eCRF.

A study setting in Viedoc's Admin application ensures that only individuals who have documented training have access to the eCRF data. Customers can use the existing user guides or create their own training material as well as upload relevant documents, links to videos etc. to produce the required training package for each individual user role.

Disabling access for a user who discontinues involvement in the study is performed by a Study or Site Manager in Viedoc Admin. Viedoc clients can appoint one or several Study and Site Managers to each project with direct access to Viedoc Admin. By doing so, they guarantee that someone knowledgeable about the study is available to solve access issues instantly and without relying on a centralized helpdesk that might only operate in one time zone. Access for a user can be removed either on role or study level. The user can also be completely removed from the study organization in Viedoc.

The immutable audit trail that is mandated to enable the key concepts of data integrity, accountability, and traceability in clinical trials, can become an irreversible privacy breach if personally identifiable information is entered by mistake in a data element accessible to the sponsor. The Viedoc solution to this is a data masking function that allows the site to mask data values that contain personally identifiable information and have been removed from the CRF, but are still exposed in the audit trail. Technically, it's a filter on top of the audit trail that prevents anyone not having the auditor role, or regulatory inspector role, from examining the information behind it. 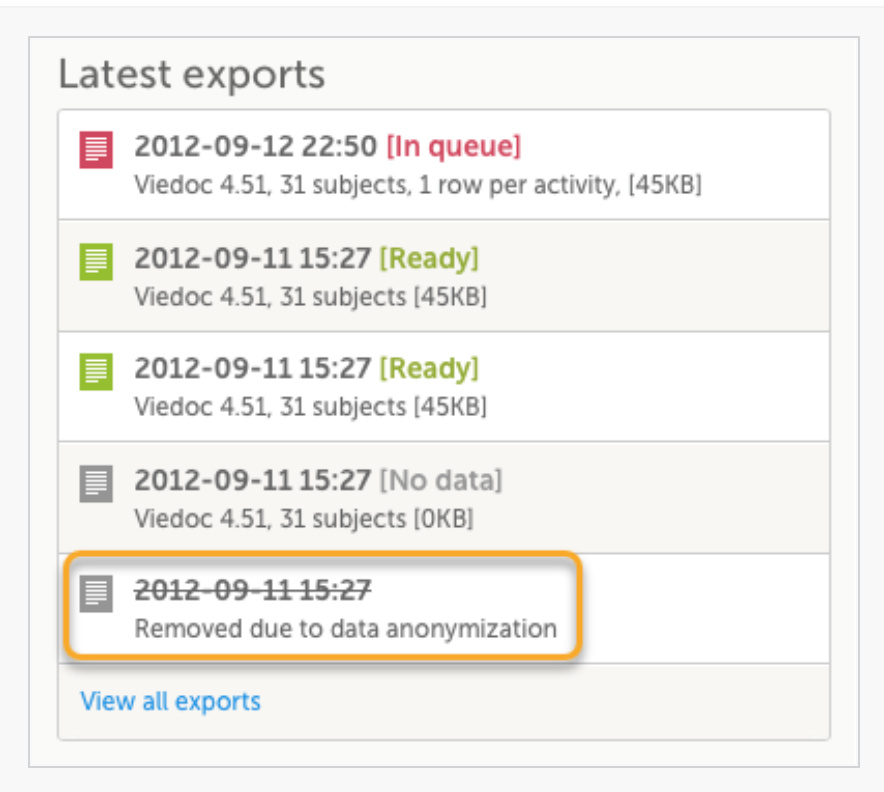 Viedoc has a flexible data export and reporting interface that allows for export of various industry-standard output formats of which one is PDF. These contemporaneous copies of eCRFs generated throughout the course of the study can be uploaded into the EHR to fulfill the site's documentation requirements. 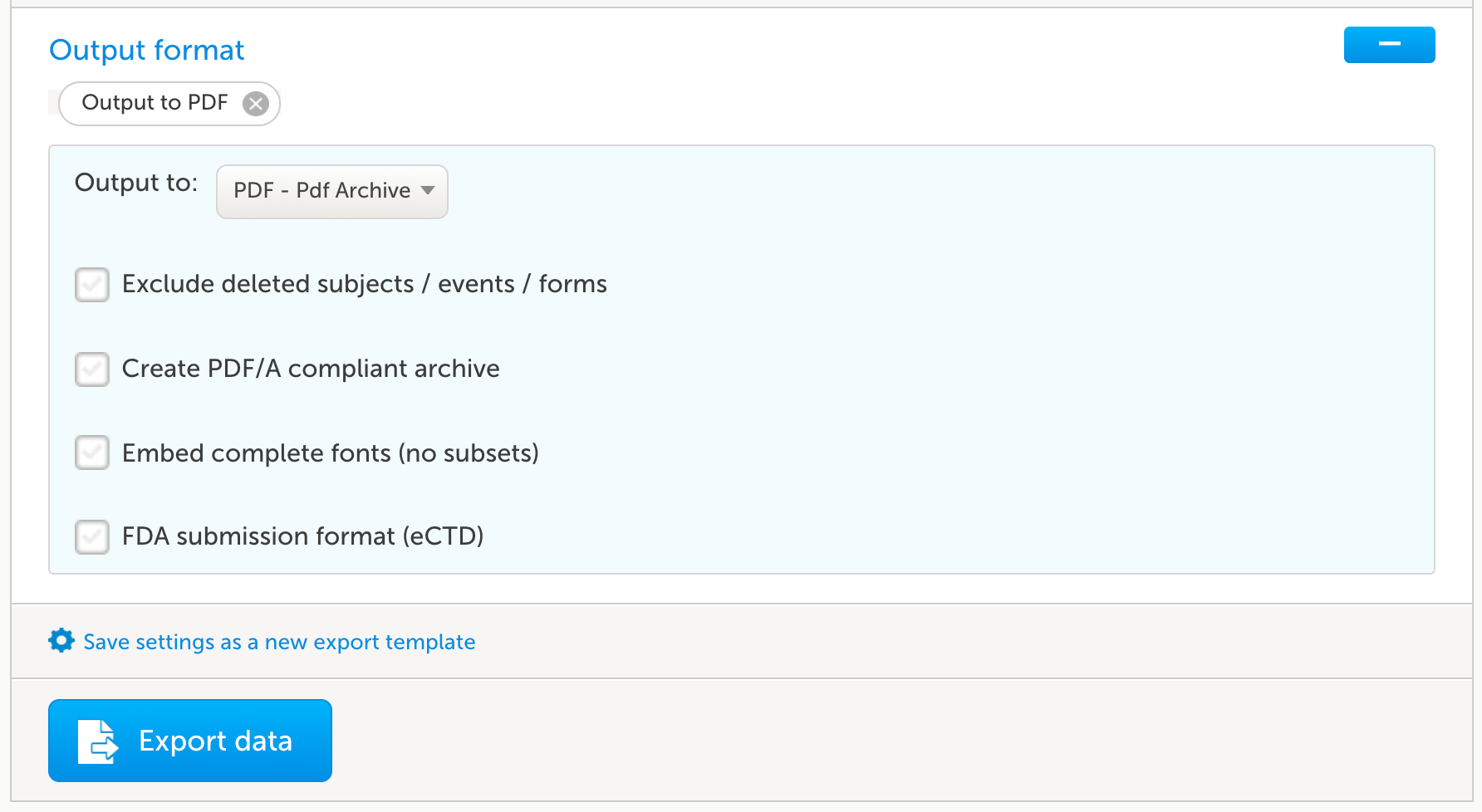 Viedoc complies with several industry-specific regulations and guidelines. The most prominent of these are:

Highlighted features in the management of eSource DDC

Viedoc is a browser-based, tablet-compatible application designed and developed to improve the execution of the trial for the participating sites. As such, it contains a large number of features. Below we have highlighted a few features that are important when it comes to the actual performance of eSource DDC:

The use of eSource DDC mustn't negatively impact the interaction between the investigator and the patient. One way of ensuring this is to make sure that the use of the eSource tool is not too complex and not limited to capturing data only, but free text as well. When designing the eCRF forms in Viedoc, the designer can choose among 15 design elements, two of them being free text and file upload. 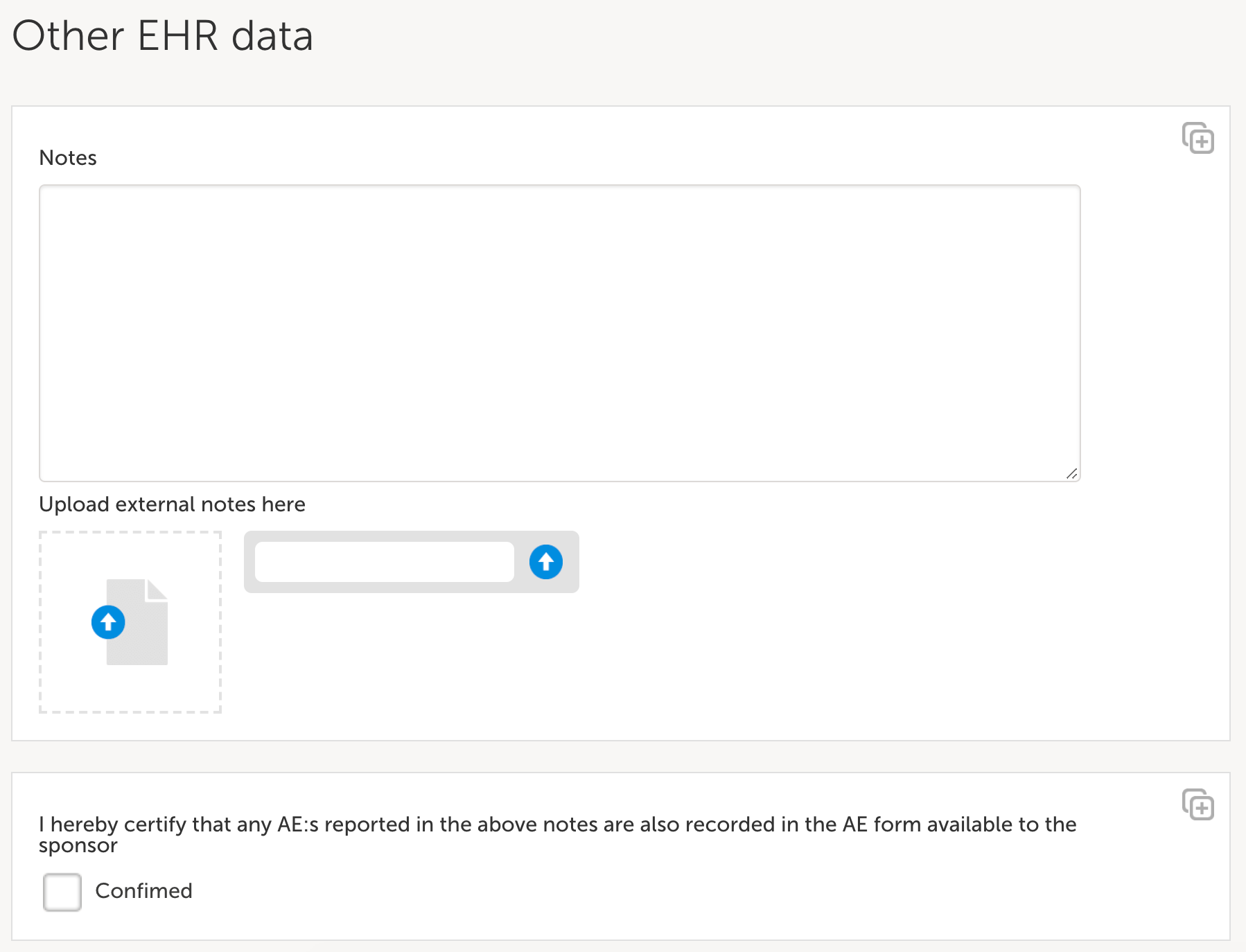 Navigation between subjects/events in the same form

Having good support for quick and efficient navigation between subjects, visits, and forms is extra important in scenarios where eSource data is collected. Viedoc's user interface and how it guides a user through complex or frequently used activities are probably the most obvious differences between Viedoc and other systems. 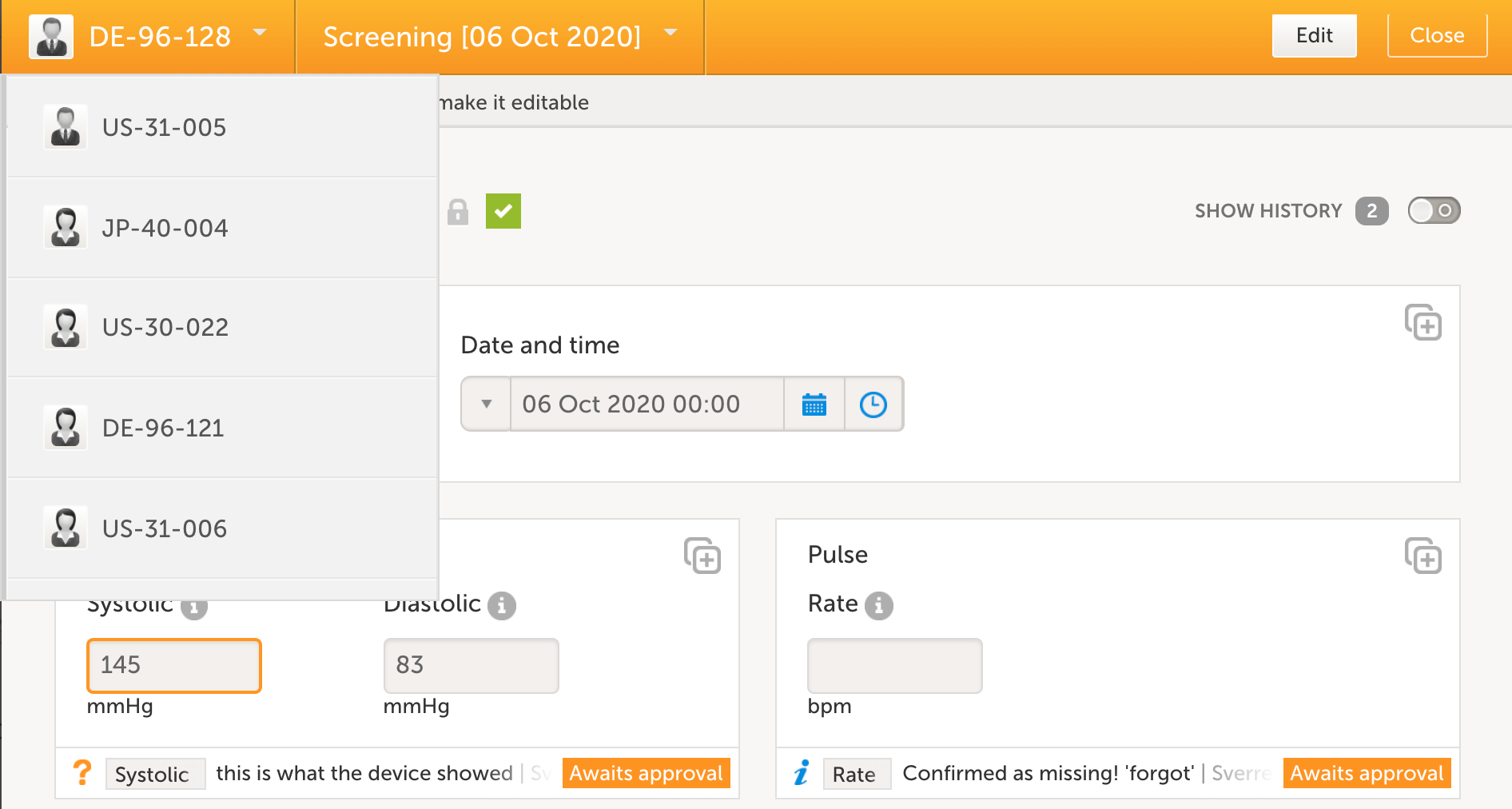 Collecting dates and/or time with a one-click action is one of many features where Viedoc supports the site staff to collect eSource data efficiently. 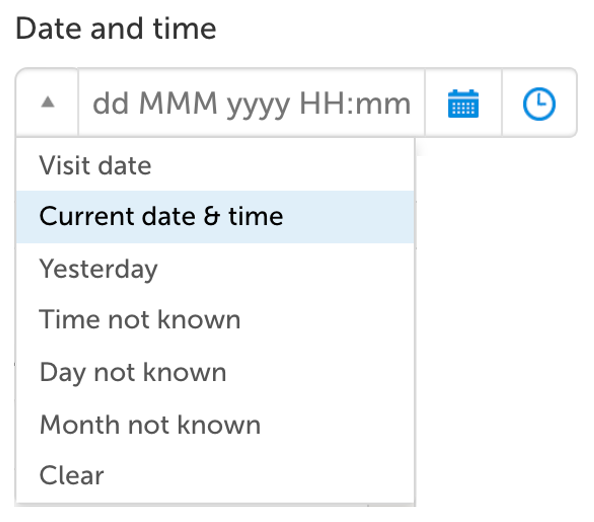 The regulatory authorities expect to be able to review relevant documentation about the chosen systems used in a clinical trial. As a Viedoc client, you can access the Viedoc Inspection Readiness Packet (VIRP) that is updated with every release. This packet provides you with information on what is relevant, what the sponsor or their representative (CRO) should have on hand, and what can be accepted as being held by the system supplier.